DANGER: STATE-REGULATED, COMPULSORY SCHOOLS ARE FAILING TO MEET THE NEEDS OF INDIVIDUALS

Why do we accept that the most naturally curious time in our lives, when everything is new and our brains are poised to learn, we instead require kids to sit still for 18 years in a row learning rote, standardized information? Have humans evolved to this point to be bored and rewarded for our obedience? We don’t think so, but unfortunately that’s the kind of school system we have. It tends to create obedient, dependent and predictable workers and consumers while failing to cultivate experimentation, original thinking and passionate learning.

The state school system is rife with problems. Former Chancellor of the Washington D.C. public schools, Michelle Rhee, attempted to transform one of the worst school districts in the nation, but was ultimately forced to resign in 2010. She offered up to $40,000 a year increase in salary to teachers who were willing to give up tenure and rely instead on performance review. She found that the majority of teachers opposed the proposal and preferred not to rely on performance for job security. The challenge of how to create accountability and a capacity to self-correct has long infused the debate on how to achieve excellence within the state-run educational systems.[1] Private schools often forego the offer of tenure in order to assure greater accountability and they attribute their greater success, in part, to this policy.

How did we get an educational system that is not only difficult to reform, but where schools function more like training grounds for obedience rather than places to foster critical thinking?

It turns out the current model of schooling originated around the turn of the century with the Rockefeller-Founded General Education Board and other Corporate Foundations including the Carnegie Foundation. They played a key role in funding teachers, schools, Universities, researchers, and curriculum and in so doing garnered influence and control of modern education. Their funding and associated Board control allowed them to control research grants, what behavior was rewarded and who was in charge. The resulting system of schooling creates a docile workforce, used to obeying commands, but not rewarded for thinking critically. This is just what the financial elite had in mind. It makes the population easier to control and more predictable. As Frederick T. Gates, business advisor to John D. Rockefeller, said,

In our dream we have limitless resources, and the people yield themselves with perfect docility to our molding hand. The present educational conventions fade from our minds; and, unhampered by tradition, we work our own good will upon a grateful and responsive rural folk...

To learn more about the takeover of education, see the “Follow the Money” story.

UNIVERSITIES BECOME THE EXTENSION OF THE INDUSTRY 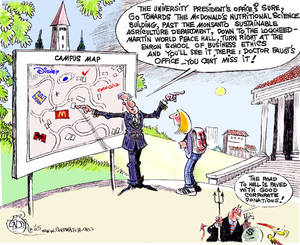 Industry funding of education has surged in recent years, which influences the outcome of research. In 2003, Yale researchers did a systematic review of 1,140 clinical trial studies and found that when research is industry-sponsored, it is “significantly more likely to reach conclusions that are favorable to the sponsor” than when it’s not funded by industry.. This happens all the time without our knowledge and can have serious consequences. For example, Harvard University tried to discount the risks of secondhand smoke for years while receiving money from the tobacco industry, including Philip Morris.

DANGER: LACK OF TRANSPARENCY IN FUNDING OF EDUCATION

This lack of transparency regarding research funding misleads the public and prevents us from making fully informed decisions. If funding sources were always revealed, we could more accurately assess information. For example, if Harvard University published studies about the “safety” of second-hand smoke, and it said “this article sponsored by the tobacco industry”, it would make readers think twice. This kind of transparency can be achieved. Check out the opportunity below.

OPPORTUNITY: WE CAN REQUIRE TRANSPARENCY OF RESEARCH FUNDING

In 2009, Harvard Medical students put pressure on their faculty to reveal ties to the pharmaceutical industry and it worked! Now all their professors and lecturers are required to disclose industry ties at the beginning of each course. We can do the same at other schools throughout the country. If you are a student, or know other students, put pressure on faculty to reveal financial conflicts of interest. If you subscribe to journals, write the editor and ask them to publish info about the financial sponsors of the studies.

EDUCATION AND TRAINING ARE FUNDAMENTAL COMPONENTS OF OUR SOCIETY.

We must challenge our current system in a critical manner since a majority of people are being steered to consecrate the largest part of their life to execute tasks in a job that has too often, as side effect, producing waste and squandering limited resources. The stress of working just for money, sometimes by doing a thankless job, deprives a large part of the human beings of theirs freedom. That leads to unsatisfaction, disease, drugs, over-consumption and so on... Is it that normal? This is not a balanced or fair equation and has resulted in a massive waste of natural resources in the past 50 years. Our youngsters deserve better than this. Let us show and teach them the true values of LIFE. Training channels should be redesigned, while at the same time remaining specialized. Basic research, science and medicine can progress in different contexts by primarily and integrally including the environment in the training process. Anything that damages health or the environment should be reassessed and improved.

That is the reality we must teach to our children. Re-shaping the future of our youth and at the same time that of our planet...